Head of the Ecology Department of the Azerbaijan Construction and Architecture University (AUAC), Professor Fagan Aliyev invited to London at December, 2017.

At the summit of leaders at the Oxford palace, scientists, business economics and medical workers nominated honorary titles. One of the winners of two thousand people was Professor Fagan Aliyev.

The Oxford Academy has been honored with an Honorary Professor Diploma to the Azerbaijani scientist.

The scientist is the author of a large number of documents, inventions, textbooks and monographs published in Azerbaijan, US, Finland, UK and Russia. He is founder and editor-in-chief of scientific journals “Energy, Ecology, Economy” and “Kainat”, “Ecoenergy”. He is also a member of the Editorial Board of the “Biomedicine” scientific journal. 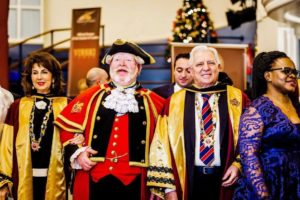 The president of IEEA, Fagan Aliyev nominated as honorary professor of Oxford University