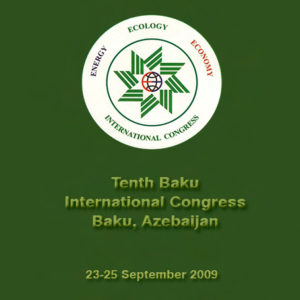 A number of delegatesfrom all over the world were invited to this anniversary forum. Specialists of well-known scientific centers of USA, Japan,  France, Germany, Norway, Turkey, Iran,Russia, Georgia and other CIS countries came to Bakuto participate in it.

Gold Medal was also awarded to minister of Industryand Energy N. Aliyevfor his contribution to International Baku Congresses “Energy, Ecology, Economy”and to chancellor of Azerbaijan  Architecture and Construction University G.Mammadovafor her continued activities devoted the development of science and education

Along with the traditional Baku congresses,IEAregularly organises scientific-practical seminars, workshops and conferencesto discuss the results of the implemented projects, to provide information about new technologies and methodsonecosystem protection, energy savingand alternative energyresource development, etc. Dozens of important conferences and seminars were held by the Academy including:

Seminar “Seismic risk study in Baku city” held on 16-17 October in Baku to discuss the results of project“Study on seismic disaster  prevention/mitigation basic plan in Baku city” implemented jointly by International Ecoenergy Academy and Japanese Kobe University under the support of Ministry of Education of Japan.

its foundation,IEA participated in the development and implementation of a number of projects of state importance.The main projects developed and implemented are:

A number of projects have been developed upon request from clients, including:

A big deal of works was carried out under the project “Development of Large-Scale Electronic Maps (1:10000) of Oil-Contaminated Soils of the Absheron Peninsula” implemented within the framework of Action Plan under the Presidential Decree from 28 September 2006.

“Hydro-Hydrogen Pilot Project” developed on the basis of cooperation with UNIDO-ICHET is one of the important steps of IEA towards renewable energy development.

The main purpose of this project is to demonstrate perspectives of using the energy generated by intermittent renewable sources such as  hydropower. Two hydropower stations each 1 MW are planned in Niyazoba village in the Kuba-Khachmas  region of Azerbaijan Republic due to the difficulties of matching energy generation with local electricity demand. 1500 kWt will be enough to meet local requirements. The excess of energy produced at hydropower plants – 500 kWt will be stored for the production of hydrogen by electrolysis for later use.   The long term goal of the project is to demonstrate the compatibility of hydrogen technologies with renewable energy generation, and act as a model for further cogeneration plants.

Kuba-Khachmas region is situated in the Northern part of Azerbaijan bordering with Russian Federation. This is one of the large agricultural regions and recreation centers of the republic in the Caspian coast. According to newly adopted governmental program on the development of tourism and recreation zones, one of the 5 tourist routes is situated in this region.       Based on the above mentioned, we can say that significant demand will be for hydrogen in Kuba-Khachmas zone in the future.

One of the projects is developed to use of hybrid renewable energy systems in mountainous Khinalig village of Guba district.

Khinalig is one of the remote Caucasus villages situated in the highest mountain zone of Azerbaijan on the middle line of the Great Caucasus, which separates Russia and South Caucasus. Being a unique travel place of Azerbaijan,  Khinalig also is an ancient research site from culture and tourism viewpoints. It has distinguished nature including ancient land of fire, rocks and wonderful forests that make this village an attractive recreation zone (at 2 hours distance of Baku city in the northern part of Guba district). Khinalig people differ from other Azeri people by their specific language, tradition and culture.

The primary goal of the project is to supply heating and electricity demand of Khinalig village through hybrid renewable energy systems.

In 2009-2010, IEA participated in the Civil Society Project: Advocacy Campaign “Effective Utilization of Renewable and Alternative Energy” in Azerbaijan.

The project was implemented under USAID support.

On July 14, 2010 IEA organised and held an International Conference  “Potentialities and perspectives of alternative and renewable energy source use in Azerbaijan”to discuss the project results.

IEA participates in the UNECE project “Development of the Renewable Energy Sector in the Russian Federation and in CIS countries: Prospects for Interregional Cooperation”.The purposeof this project  is to promote interregional cooperation to overcome the existing barriers to the development of renewable energy resources.

In 2010-2011, under the EU ERSP the International Ecoenergy Academy implemented a project “Improvement of Azerbaijan’s legislation relating to Renewable Energy Sources and Energy Efficiency and its bringing in conformity to the EU legislation”.

Draft laws and standards regulating development of non-traditional renewable energy sources and energy saving were developed. Among them there are  draft laws “On Energy Saving and Increasing Energy Efficiency” and “On utilization of Renewable Energy Sources” and 23 secondary legislation documents needed to ensure the implementation of these  laws. In addition, a package of proposals on the amendments in 17 of the existing laws were prepared and submitted to Azerbaijan government.

The main regulations and standards developed under the project are: