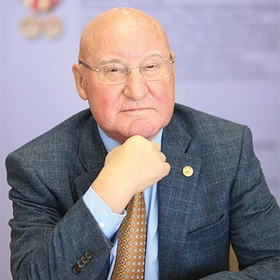 Yury Andreevich Tabunshchikov is a Soviet and Russian scientist, teacher, doctor of technical sciences, corresponding member of Russian Academy of Architecture and Construction Science, professor, head of the department of Moscow Architectural Institute (state academy) editor-in-chief of the scientific journal  “ABOK” and deputy editor-in-chief of the magazine “Energy saving”. From 1990 to the present, he is president of  “ABOK” (non-commercial partnership “Engineers for heating, ventilation, air conditioning, heat supply and construction thermal physics”). The main directions of scientific activity – mathematical modeling of the thermal conditions of buildings; development of normative documents; experimental studies of the thermal conditions of buildings in extreme climatic conditions.

Under the guidance of Yu.A.Tabunshchikov 22 specialists defended PhD theses and four – doctoral. The author of more than 400 scientific works, including seven monographs, including “Mathematical modeling of the thermal conditions of buildings”, published in the US in English, as well as co-author of the first textbook for architectural specialties “Engineering equipment of buldings and structures.”

Yu.A.Tabunshchikov is the initiator of the organization and holding of the conference and exhibition “Moscow – an energy-efficient city”, held since 1993 The congresses of “ABOK”, the international symposium “Power of large cities” are the professor’s other works.